The following is an abridged version of our classification decision on the Christchurch Mosque Attack Livestream. Please be advised some of the content discussed could be distressing for the reader. For the full legal decision, please see the linked file at the end of this document.

Christchurch Mosque Attack Livestream is a video of a terrorist attack in Christchurch. It is 16 minutes and 55 seconds long. It contains dialogue in English. The video features footage of the mass murder of worshippers in a New Zealand mosque viewed in a ‘first person’ perspective via a camera apparently fixed to the attacker’s helmet.

A man is shown in a car with a large cache of weapons. He travels to his destination while listening to music in his car. The video depicts the shooting of many people, including men, women and at least one young person. Injuries and deaths are clearly depicted. The attacker then drives away from the crime scene, stopping to fire a shotgun through the windscreen, and also at pedestrians through the front passenger window. The audio track records him analysing his performance and the performance of his weaponry during the attack, before the video cuts out.

The Classification Office understands that the video was originally live-streamed on Facebook and subsequently uploaded to other websites and platforms.

According to Section 3(1) of the Films, Videos & Publications Classifications Act (FVPC Act) a publication is objectionable if it describes, depicts, expresses, or otherwise deals with matters such as sex, horror, crime, cruelty, or violence in such a manner that the availability of the publication is likely to be injurious to the public good.

The video in question deals with matters of horror, crime, cruelty and violence. It documents events immediately prior to, during, and after the mass murder of peaceful and unarmed civilians at a Christchurch mosque. Much of the sound and imagery is horrific.

Under s3(2)(f) of the FVPC Act, this publication also promotes and supports the infliction of extreme violence or extreme cruelty. The attacker repeatedly returns to the same building to inflict injury and death, while reloading or picking up new weapons. Victims are shot and killed as they try to avoid the attacker, while they lie wounded, or while they try to protect others. The murders and bodies are shown in detail. The first-person perspective of the camera records the actions of the attacker, creating the disturbing effect of seeing the attack from his perspective.

Notwithstanding the clear application of s3(2)(f), the video can also be considered objectionable under s3(3)(d) due to the extent and degree to which, and the manner in which, the publication promotes or encourages criminal acts or acts of terrorism.

In addition to the high extent and degree of promotional violence, killing and cruelty previously mentioned, the video contains other notable elements that promote or encourage criminal acts or acts of terrorism.

References to popular extremist memes or cultural references are present throughout the video. These present as intentional cues, or flags for the attacker’s intended audience. For example:

There are other phrases, names and memes contained in this video and written on the attacker’s weapons but which are not clearly visible. We are aware that there are detailed analyses of these memes widely available on the internet.

This material promotes and encourages terrorist activity to a high extent and degree, but it is the manner in which this content is presented throughout the video that is most injurious to the public good.

The ‘first person’ presentation of the video - from the helmet-mounted camera - has the extreme effect of showing the dehumanisation of the victims from the attacker’s perspective. In the aftermath of the killing, as the attacker drives at speed to his next destination, he reflects on his own performance and the performance of his weaponry. His only regret appears to be the malfunctioning of the modified ammunition clips that fell out of his weapons during the attack. He remarks that this occurred during the “firefight”, entirely mischaracterising his attack upon unarmed victims.

He further dehumanises his victims by referring to them only as ‘targets’. He states, “There wasn’t even time to aim, there were so many targets”.

The manner in which violence, cruelty, murder and terrorism are promoted throughout the video creates a high probability of significant injuries to the public good. In particular:

The dominant effect of the publication is of a self-made video depicting harrowing violence and cruelty while attempting to record, share and glorify the terrorist activity of the attacker.

The digital nature of the video means that it is able to be shared online. Its ongoing circulation will likely perpetuate terrorist methods and racist ideology. Its ongoing circulation could also traumatise relatives and friends of the victims, re-victimise survivors and shock and disturb the wider public. The video was widely distributed to members of the New Zealand public in the hours after the attack through various apps and online platforms. It was clearly created with the intent that it would be shared widely. A post on an internet forum immediately prior to the attack makes the intended purpose of the video clear. The poster announces his intention to carry out the attacks and to livestream them, and provides a link so that followers can stream the video. The last message on the forum prior to the attacks presents the poster as a heroic figure and encourages people to share the material and make memes related to the poster, effectively attempting to glorify the poster. The intent is further clarified by the attacker’s repeated verbal appeals to his audience during the attack (whom he refers to as ‘lads’ and ‘boys’).

In posts apparently made as the attack progressed it is evident that at least some of the intended audience have received the message and feel emboldened by it, thereby achieving the video’s purpose. Many appear to be carrying out the poster’s instructions, sharing links to the manifesto and the video and downloading copies.

There is a vast amount of media and official comment on this attack, but we have sought to focus on factors immediately relevant to the classification of the material.

The video promotes and supports the infliction of extreme violence and cruelty. The first-person view records the actions of the attacker creating the disturbing effect of seeing the attack from his own perspective. The video is clearly intended to record, share and glorify the acts of extreme violence and cruelty, namely the graphic mass murder of unsuspecting victims who are powerless to resist. There is nothing present that denounces such activity.

In making this decision, the right to freedom of expression – that is to seek, receive and impart information and opinions – protected under s14 of the NZBORA was considered, together with the fact that under s5 of the NZBORA this freedom is subject “only to such reasonable limits prescribed by law as can be demonstrably justified in a free and democratic society”.

An objectionable classification for this video is considered to be a demonstrably justified limit on that freedom in this case due to the high likelihood of significant injuries to the public good arising directly from the video’s continued availability.

The video may have forensic and evidentiary value for Police, the Courts and other enforcement agencies. These parties are already permitted to possess the video for these and other purposes under s131(4) of the FVPC Act.

The following classification decision on the Christchurch Mosque Attack Livestream contains graphic references to acts of extreme violence, cruelty and acts of terrorism.

Some descriptions of the video content may disturb or upset readers 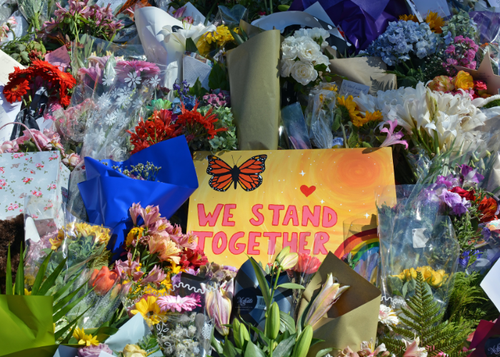